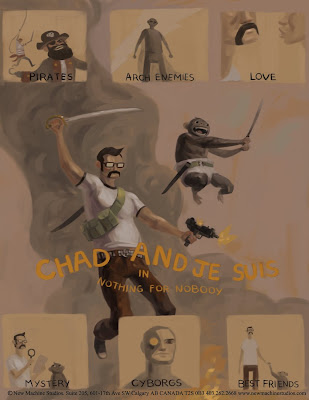 Chad and Je Suis, is more of a studio inside joke than an anything else, but I believe it could be hilarious for anyone given some development. So Chad is just Chad from our studio with his punk rock nothing for nobody attitude and Je Suis is a Monkey friend, sidekick, pet kinda thing. The setting is a post apocalytic world like road warrior but with maybe more dangers than you thought imagineable. Now they stumble onto a terryfying electicfying journey where Chad learns that it just maybe might be worthwhile to do something for somebody.
Posted by Chris Johnston at 8:14 PM

Chad et Je'suis. The cause, and solution, to all our problems. Mystery!