A Quest for Magic 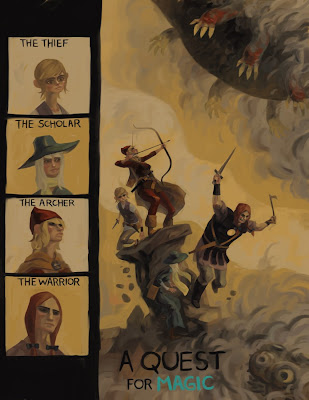 I did up three onesheets which are from my understanding a quick pitch, try to catch the eye of someone who would be interested in developing the idea further or at least hear you pitch the idea with words from your mouth or in my case words from Colin Curwens mouth. Anyways the first sheet here is A Quest For Magic it would be an action adventure fantasy type thing focusing on the awesome abilities of the four main characters, which is why I composed the sheet with the portraits of them on the side, they are cliché characters but I wanted to play with that to get an some what over the top fantasy thing as humor. The synopsis so far is this. Magic has vanished, an Empire dependent upon it is thrown into panic and such. Those Noble enough Daring enough , to cross the OCEANS OF SALT, the SANDS OF HATE, the FOREST OF TERRIBLE DEPRESSION and beyond will undertake the A QUEST FOR MAGIC.

Posted by Chris Johnston at 5:07 PM

I really like this idea. So I guess they take everything super seriously even though it's so cliche it's silly?