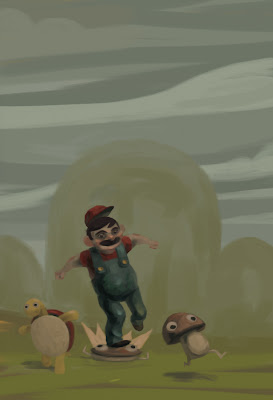 Sketched this after seeing that Mario short by the people who do family guy, then decided to paint it up in photoshop weeee. So I figure in the world of Mario, Mario himself is the scariest thing out there running around smashing everything destroying those bricks that I assume the turtle guys make or the little mushrooms, stealing the turtle guys shells and all thier gold coins. But in the end I guess it's thier own faults for being subjects of Bowser who loves to kidnapped princesess. As far as painting this goes I'm really into flat areas of color and trying to fade parts of characters into the background, I've been looking at a lot of Manet's paintings and going from there.
Posted by Chris Johnston at 9:34 PM

This would be a fun series. Mario can do all of the horrible things you mention, but the minions have to risk it or their families will starve.

Hilarious. Not to mention his star power, or many lives.